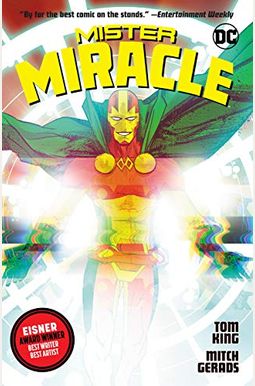 No prison can hold him. No trap can contain him. He is Scott Free, the worldwide celebrity sensation known as Mister Miracle, and he is the greatest escape artist who ever lived. But can he pull off the ultimate trick--and escape death itself?

Something has gone horribly wrong with the perfect life that Scott and his wife, Big Barda, have made for themselves on Earth. With war raging between their homeworlds of Apokolips and New Genesis, Scott's cruel adoptive father, Darkseid, seems to have finally found the Anti-Life Equation--the weapon that will give him total victory. As the mountains of bodies on both sides grow ever higher, only Mister Miracle can stop the slaughter and restore peace. But the terrible power of the Anti-Life Equation may already be at work in his own mind, warping his reality and shattering the fragile happiness he's found with the woman he loves. Is death the trap that's been waiting for him all along? Or is it life itself? And what price will Scott Free have to pay to learn the answer? Collects Mister Miracle #1-12 along with bonus content in an all new delux hardcover format

0
|   0  reviews
Did you read Mister Miracle: The Deluxe Edition? Please provide your feedback and rating to help other readers.
Write Review

List of All Editions of Mister Miracle: The Deluxe Edition