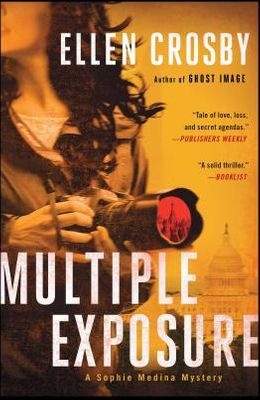 This globe-trotting mystery featuring intrepid photojournalist Sophie Medina is an assured tale of love, loss, and secret agendas, the first in a new series, which. offers a complex portrait of our nation's capital, with its historic beauty and roiling underbelly of deceit and danger (Publishers Weekly).

When photojournalist Sophie Medina returns to London from an overseas assignment, she discovers that her husband, Nick, a geologist and covert CIA operative, has been abducted and assumed dead. Three months later, a friend in the British government relays that Nick has been spotted in Moscow, but Sophie is allowed little joy before the news turns dark--Nick is accused as a suspect in his boss's murder and rumors circulate that he's involved in illicit Russian oil deals. With her every step closely watched, Sophie moves to Washington, DC, to be with her family and friends. There, Sophie is drawn deeper into Nick's shadowy world. While photographing an exhibit of two never-before-seen Faberg imperial eggs at the National Gallery of Art, Sophie is confronted by a Russian oil tycoon, implicating her husband in an international energy scheme. On the run from Nick's enemies, Sophie plays a high-stakes game of Russian roulette as she tries to determine friend from foe and prove her husband's innocence. Weaving together political intrigue, art history, and international espionage, the fast-paced Multiple Exposure is the thrilling first novel of an exciting new series.

0
|   0  reviews
Did you read Multiple Exposure: A Sophie Medina Mystery? Please provide your feedback and rating to help other readers.
Write Review

List of All Editions of Multiple Exposure: A Sophie Medina Mystery