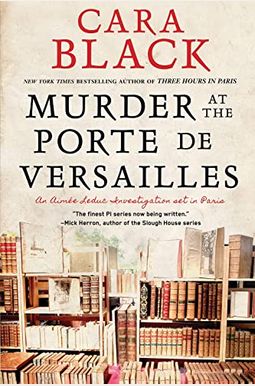 Murder at the Porte de Versailles

November, 2001: in the wake of 9/11, Paris is living in a state of heightened fear, with constant bomb alerts and ethnic tension high. For Aim e Leduc, November is bittersweet: the anniversary of her father's death and her daughter's third birthday fall on the same day. A gathering for family and friends is disrupted when a bomb goes off at the police laboratory--and Boris Viard, the partner of Aim e's friend Michou, is found unconscious at the scene of the crime, his fingerprints on the bomb fragments.

Aim e doesn't believe Boris set the bomb. In an effort to prove him not guilty, she battles the police and his own lab colleagues, collecting conflicting eyewitness reports. When a member of the French secret service drafts Aim e to help investigate possible links to an Iranian Revolutionary guard and fugitive radicals who bombed Interpol in the 1980s, Aim e uncovers ties to a cold case of her father's. As Aim e scours the streets of Teheran-sur-Seine trying to learn the truth, she has to ask herself if she should succumb to pressure from Chloe's biological father and move them out to his farm in Brittany. But could Aim e Leduc ever leave Paris?

Frequently Asked Questions About Murder at the Porte de Versailles

0
|   0  reviews
Did you read Murder at the Porte de Versailles? Please provide your feedback and rating to help other readers.
Write Review

List of All Editions of Murder at the Porte de Versailles