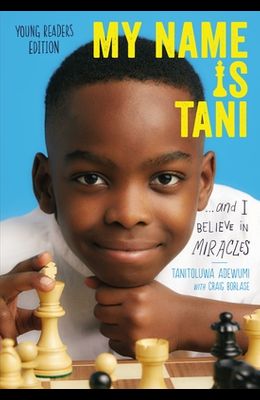 My Name Is Tani . . . and I Believe in Miracles

At eight years old, Tani Adewumi, a Nigerian refugee, won the 2019 New York State Chess Championship after playing the game for only a year--and while homeless. His story is full of miracles and hope.

Tani and his family's amazing story began amid Boko Haram's reign of terror in their native country of Nigeria. They fled their home to the United States, where they lived in a New York City homeless shelter as they waited to be granted religious asylum. Tani began attending PS 116, where his classmates were unaware that he and his family had no home. So when Tani asked his parents if he could join the chess program at school, which required a fee, it seemed unlikely. But his mother wrote to the coach, who offered Tani a scholarship.

This adaptation will focus on the portions of Tani's story that will most interest young readers. The struggle of leaving his comfortable home and moving to a new country with nothing. Living in America as a homeless family. Having no TV, no games, no money. Wanting a place for his mom to cook meals and a refrigerator where he could get a snack whenever he was hungry. Going to a new school. Meeting a teacher who taught him the game of chess, which allowed him to learn, compete, and experience the pressures of the game and the ultimate joy of winning.

Frequently Asked Questions About My Name Is Tani . . . and I Believe in Miracles

0
|   0  reviews
Did you read My Name Is Tani . . . and I Believe in Miracles? Please provide your feedback and rating to help other readers.
Write Review

List of All Editions of My Name Is Tani . . . and I Believe in Miracles