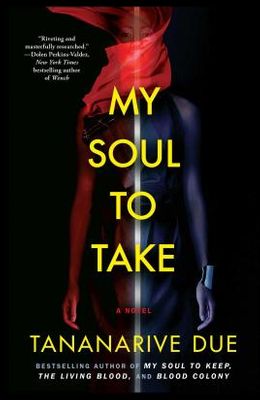 My Soul to Take

Essence bestselling and award-winning author Tananarive Due delivers a heart-stopping new novel continuing the story of descendants of an immortal line of people who are the only ones capable of saving the world.

Fana, an immortal with tremendous telepathic abilities, is locked in a battle of wills. Her fianc is Michel. But Johnny Wright, a mortal who is in love with her, believes that if she doesn't stay away from Michel, they will become the Witnesses to the Apocalypse described in the Book of Revelation. Fana and the Life Brothers are rushing to distribute their healing Living Blood throughout the world, hoping to eliminate most diseases before Fana is bound to marry Michel. Still, they cannot heal people faster than Michel can kill them. Due weaves a tangled web in this novel, including beloved characters from her bestselling Joplin's Ghost, in a war of good against evil, making My Soul to Take a chilling and thrilling experience.

Frequently Asked Questions About My Soul to Take

African Immortals Series In Order - By Tananarive Due

0
|   0  reviews
Did you read My Soul to Take? Please provide your feedback and rating to help other readers.
Write Review

List of All Editions of My Soul to Take