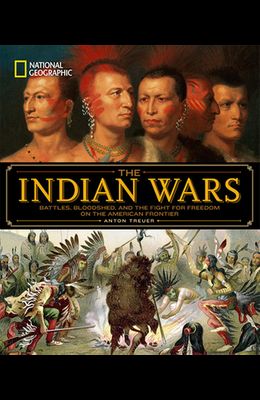 National Geographic the Indian Wars: Battles, Bloodshed, and the Fight for Freedom on the American Frontier

From Lakota warrior Crazy Horse to legendary Geronimo of the Apache Wars, this sweeping history of the American West tells the story of those who defended Native American lands--and the Native American way of life--from the 1850s through the end of the nineteenth century.

This majestic narrative reveals little-known tales of Native American history, setting each event in the larger historical context of the transformation of the West. In elegant National Geographic style, hundreds of illustrations, maps, photographs, and artwork lay bare the bloody conflicts between Native Americans and European encroachment. Five stirring chapters reveal the five major types of conflicts involving Native Americans: the wars of resistance, the wars between empires, the wars betweeen the tribes, the wars of conquest, and the wars of survival. Within each chapter, vivid accounts of each battle tell the gripping stories of the major players, the point of combustion, and the tragic results. Readers will also get to know each tribe as distinct people, ranging from the so-called civilized tribes to the more aggressive warrior cultures. Rarely seen photographs and illustrations paint a vivid portrait of the time, featuring such notable figures as Kit Carson and Sitting Bull. Filled with original National Geographic maps, informative timelines, and a complete index, this extraordinary book captures one of the most significant moments in American history.

Frequently Asked Questions About National Geographic the Indian Wars: Battles, Bloodshed, and the Fight for Freedom on the American Frontier

0
|   0  reviews
Did you read National Geographic the Indian Wars: Battles, Bloodshed, and the Fight for Freedom on the American Frontier? Please provide your feedback and rating to help other readers.
Write Review

List of All Editions of National Geographic the Indian Wars: Battles, Bloodshed, and the Fight for Freedom on the American Frontier