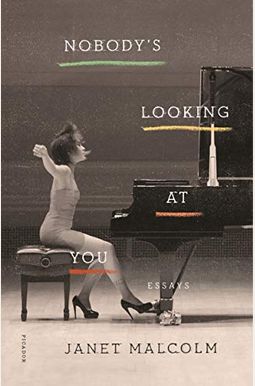 Nobody's Looking At You: Essays

Malcolm is always worth reading; it can be instructive to see how much satisfying craft she brings to even the most trivial article. --Phillip Lopate, TLS

Janet Malcolm's previous collection, Forty-One False Starts: Essays on Artists and Writers, was unmistakably the work of a master (The New York Times Book Review). Like Forty-One False Starts, Nobody's Looking at You brings together previously uncompiled pieces, mainly from The New Yorker and The New York Review of Books. The title piece of this wonderfully eclectic collection is a profile of the fashion designer Eileen Fisher, whose mother often said to her, Nobody's looking at you. But in every piece in this volume, Malcolm looks closely and with impunity at a broad range of subjects, from Donald Trump's TV nemesis Rachel Maddow, to the stiletto-heel-wearing pianist Yuju Wang, to the big-league game of Supreme Court confirmation hearings. In an essay called Socks, the Pevears are seen as the sort of asteroid that] has hit the safe world of Russian Literature in English translation, and in Dreams and Anna Karenina, the focus is Tolstoy, one of literature's greatest masters of manipulative techniques. Nobody's Looking at You concludes with Pandora's Click, a brief, cautionary piece about e-mail etiquette that was written in the early two thousands, and that reverberates--albeit painfully--to this day.

Frequently Asked Questions About Nobody's Looking At You: Essays

0
|   0  reviews
Did you read Nobody's Looking At You: Essays? Please provide your feedback and rating to help other readers.
Write Review

List of All Editions of Nobody's Looking At You: Essays