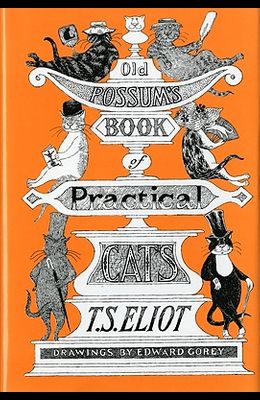 NOW A MAJOR MOTION PICTURE The poems by T. S. Eliot that inspired the movie Cats

Cats Some are sane and some are mad and some are good and some are bad. Meet magical Mr. Mistoffelees, sleepy Old Deuteronomy, and curious Rum Tum Tugger. But you'll be lucky to meet Macavity because Macavity's not there In 1925 T. S. Eliot became co-director of Faber & Faber, who remain his publishers to this day. Throughout the 1930s he composed the now famous poems about Macavity, Old Deuteronomy, Mr. Mistoffelees, and many other cats under the name of Old Possum. In 1981 Eliot's poems were set to music by Andrew Lloyd Webber as Cats, which went on to become the longest-running Broadway musical in history and is now a film starring Taylor Swift, Idris Elba, Judi Dench, Ian McKellan, Rebel Wilson, Jennifer Hudson, Jason Derulo, Francesca Hayward, and James Corden. With illustrations by Rebecca Ashdown.

0
|   0  reviews
Did you read Old Possum's Book of Practical Cats? Please provide your feedback and rating to help other readers.
Write Review

List of All Editions of Old Possum's Book of Practical Cats