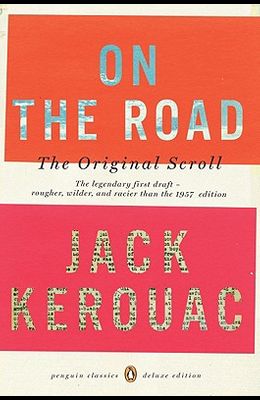 On the Road: The Original Scroll: (Penguin Classics Deluxe Edition)

The legendary 1951 scroll draft of On the Road, published as Kerouac originally composed it

IN THRE WEKS in April of 1951, Jack Kerouac wrote his first full draft of On the Road--typed as a single-spaced paragraph on eight long sheets of tracing paper, which he later taped together to form a 120-foot scroll. A major literary event when it was published in Viking hardcover in 2007, this is the uncut version of an American classic--rougher, wilder, and more provocative than the official work that appeared, heavily edited, in 1957. This version, capturing a moment in creative history, represents the first full expression of Kerouac's revolutionary aesthetic. For more than seventy years, Penguin has been the leading publisher of classic literature in the English-speaking world. With more than 1,700 titles, Penguin Classics represents a global bookshelf of the best works throughout history and across genres and disciplines. Readers trust the series to provide authoritative texts enhanced by introductions and notes by distinguished scholars and contemporary authors, as well as up-to-date translations by award-winning translators.

Books like On the Road: The Original Scroll: (Penguin Classics Deluxe Edition)

0
|   0  reviews
Did you read On the Road: The Original Scroll: (Penguin Classics Deluxe Edition)? Please provide your feedback and rating to help other readers.
Write Review

List of All Editions of On the Road: The Original Scroll: (Penguin Classics Deluxe Edition)