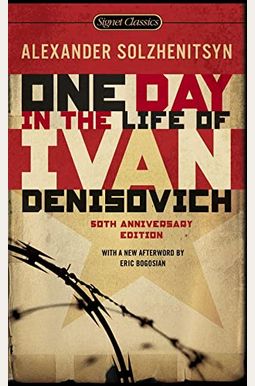 One Day In The Life Of Ivan Denisovich

One Day in the Life of Ivan Denisovich is an undisputed classic of contemporary literature. First published (in censored form) in the Soviet journal Novy Mir in 1962, it is the story of labor-camp inmate Ivan Denisovich Shukhov as he struggles to maintain his dignity in the face of communist oppression. On every page of this graphic depiction of Ivan Denisovich's struggles, the pain of Aleksandr Solzhenitsyn's own decade-long experience in the gulag is apparent--which makes its ultimate tribute to one man's will to triumph over relentless dehumanization all the more moving. An unforgettable portrait of the entire world of Stalin's forced-work camps, One Day in the Life of Ivan Denisovich is one of the most extraordinary literary works to have emerged from the Soviet Union. The first of Solzhenitsyn's novels to be published, it forced both the Soviet Union and the West to confront the Soviet's human rights record, and the novel was specifically mentioned in the presentation speech when Solzhenitsyn was awarded the Nobel Prize in Literature in 1970. Above all, One Day in the Life of Ivan Denisovich establishes Solzhenitsyn's stature as a literary genius whose talent matches that of Dostoevsky, Turgenev, Tolstoy (Harrison Salisbury, The New York Times). This unexpurgated, widely acclaimed translation by H. T. Willetts is the only translation authorized by Solzhenitsyn himself. chevron_left Read Less

Books like One Day In The Life Of Ivan Denisovich

0
|   0  reviews
Did you read One Day In The Life Of Ivan Denisovich? Please provide your feedback and rating to help other readers.
Write Review