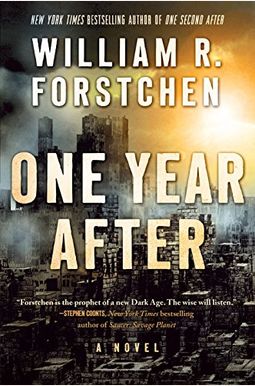 One Year After: A John Matherson Novel

Book #2 in the After Series
by
William R Forstchen
$15.92
Select Format

One Year After is the New York Times bestselling follow-up to William R. Forstchen's smash hit One Second After, the novel cited on the floor of Congress as a book all Americans should read

The story begins one year after One Second After ends, two years since nuclear weapons were detonated above the United States and brought America to its knees. After months of suffering starvation, war, and countless deaths, the survivors of Black Mountain, North Carolina, are beginning to recover technology and supplies they had once taken for granted, like electricity, radio communications, and medications. When a federal administrator arrives in a nearby city, they dare to hope that a new national government is finally emerging.

That hope quickly diminishes when town administrator John Matherson learns that most of the young men and women in the community are to be drafted into the Army of National Recovery and sent to trouble spots hundreds of miles away. He and the people of Black Mountain protest vehemently. But the New Regime is already tyrannizing one nearby community.

Will Matherson's friends and neighbors be next?

This edition of the book is the deluxe, tall rack mass market paperback.

Other Books
Pillar to the Sky
48 Hours

Frequently Asked Questions About One Year After: A John Matherson Novel

After Series In Order - By William R Forstchen

5
|   1  review
Did you read One Year After: A John Matherson Novel? Please provide your feedback and rating to help other readers.
Write Review
1

List of All Editions of One Year After: A John Matherson Novel