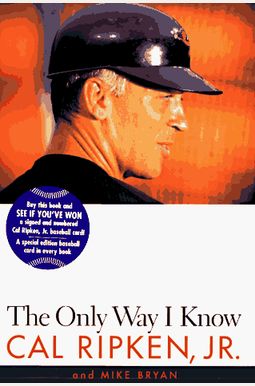 Only Way I Know

There aren't many Americans who didn't feel a lump in their throat watching Cal Ripken, Jr. take a historic jog around the bases on the evening of September 6, 1995--the night he smashed Lou Gehrig's record number of 2,130 consecutively played games. But, as the hardest working man in baseball will tell you, he was just doing his job. And now he tells you just how he does it, why he does it, and how it makes him feel.

With the candor and grace that have endeared him to fans everywhere, Cal Ripken, Jr. tells the story of his journey to the major leagues: of his early childhood and life with a baseball manager for a father; his stint in the minors, working his way up from the Rookie Leagues to Triple-A; and finally to the permanent call from Baltimore where he began the drive to an All-Star career. Cal talks with warmth of his mentors and teammates, and with honesty of the Orioles' roller-coaster ride from the pennant to a lamentable 0-21 start in the eighties. He reveals his innermost thoughts on the game, and leads us through his strategies at the plate and on the field. Best of all, Cal reveals what makes him tick: his commitment to the game, to his family, to his career, and to the team. In this rich and rewarding memoir, we find out why he's credited with putting the great back into America's greatest game: it's the only way he knows.

Frequently Asked Questions About Only Way I Know

0
|   0  reviews
Did you read Only Way I Know? Please provide your feedback and rating to help other readers.
Write Review

List of All Editions of Only Way I Know