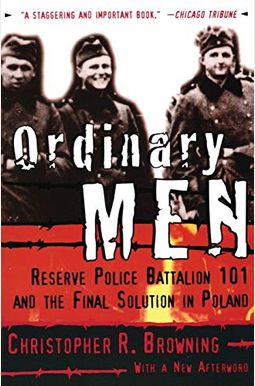 In March 1942, approximately 75 to 80 percent of all victims of the Holocaust were still alive. Eleven months later, 75 to 80 percent were dead -- the result, according to Christopher R. Browning, of a short, intense wave of mass murder centered in Poland. One German unit of just over 450 men, Reserve Police Battalion 101, was responsible for the shooting of 39,000 Polish Jews and the deportation of 44,000 more to the Treblinka death camp over a period of 16 months.

In this chilling and stunningly powerful work, Browning describes how a group of average men became the cold-blooded murderers of tens of thousands of Jews. Drawing on a judicial interrogation of 210 members of the Battalion in the 1960's, he paints a portrait of the soldiers who took so many lives and comes to a disturbing conclusion about the universality of such barbarity in our world. Christopher R. Browning is a professor of history at Pacific Lutheran University in Tacoma, Washington. He is a contributor to Yad Vashem's official twenty-four volume history of the Holocaust and the author of three books on the subject. A remarkable -- and singularly chilling -- glimpse of human behavior . This meticulously researched book . represents a major contribution to the literature of the Holocaust. -- Andrew Nagorski, Newsweek

Books like Ordinary Men: Reserve Police Battalion 101 And The Final Solution In Poland

0
|   0  reviews
Did you read Ordinary Men: Reserve Police Battalion 101 And The Final Solution In Poland? Please provide your feedback and rating to help other readers.
Write Review

List of All Editions of Ordinary Men: Reserve Police Battalion 101 And The Final Solution In Poland