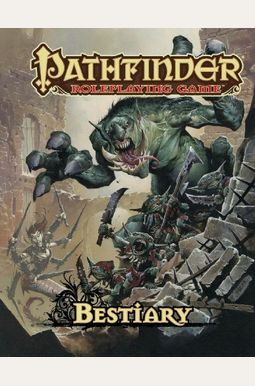 Within this tome you'll find fire-breathing dragons and blood-drinking vampires, vile demons and shapechanging werewolves, sadistic goblins and lumbering giants, and so much more Yet not all the creatures in this book are enemies, for some can serve lucky heroes as allies or advisors, be they summoned angels or capricious nymphs. And it doesn't stop there--with full rules for advancing monsters, adapting monsters to different roles, and designing your own unique creations, you'll never be without a band of hideous minions again

The Pathfinder RPG Bestiary is the must-have companion volume to the Pathfinder RPG Core Rulebook This new softcover edition of the Pathfinder RPG Bestiary includes:
-More than 350 different monsters
-Dozens of monstrous variants to modify creatures and keep players on their toes
-Numerous lists of monsters to aid in navigation, including lists by Challenge Rating, monster type, and habitat
-Extensive rules for creating effective and balanced monsters
-Rules for advancing monsters by hit dice, template, or class level
-Universal monster rules to simplify special attacks, defenses, and qualities like breath weapons, damage reduction, and regeneration
-More than a dozen feats tailored especially for monsters
-Suggestions for monstrous cohorts
-Two dozen additional animal companions
-More than a dozen different wandering monster encounter tables
-. and much, much more

0
|   0  reviews
Did you read Pathfinder Roleplaying Game: Bestiary 1? Please provide your feedback and rating to help other readers.
Write Review

List of All Editions of Pathfinder Roleplaying Game: Bestiary 1