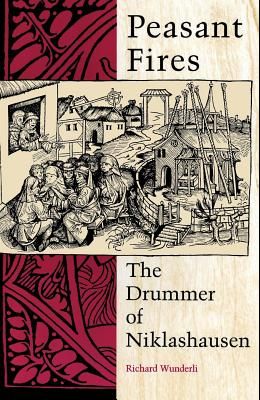 Peasant Fires: The Drummer of Niklashausen

Wunderli . . . has lucidly reconstructed a controversial conflict in 15th-century south-central Germany. . . . this engaging narrative takes off from Hans Behem--the peasant who claimed to see the Virgin and gained followers until crushed by the established church--to explore larger forces at work in Germany on the eve of the Reformation. . . Wunderli also attempts to sort out the violent conflict that ensued and Hans's subsequent trial. His scrupulousness and sensitivity make for a small but valuable book. --Publishers Weekly

Fascinating and well written, this is highly recommended for academic and larger public libraries. --Library Journal

Richard Wunderli . . . deftly tells the story in Peasant Fires, finding in it a foreshadowing of peasant uprisings in the 16th century. --New York Times Book Review

In 1476, an illiterate German street musician had a vision of the Virgin Mary and began to preach a radical social message that attracted thousands of followers--and antagonized the church. The drummer was burned at the stake. This swiftly moving narrative of his rise and fall paints a vivid portrait of 15th-century German society as it raises important questions about the craft of history.

A gem of a book. . . . It has a plot, good guys and bad buys, it opens up a 'strange' world, and it is exceptionally well written. --Thomas W. Robisheaux

Frequently Asked Questions About Peasant Fires: The Drummer of Niklashausen

0
|   0  reviews
Did you read Peasant Fires: The Drummer of Niklashausen? Please provide your feedback and rating to help other readers.
Write Review

List of All Editions of Peasant Fires: The Drummer of Niklashausen