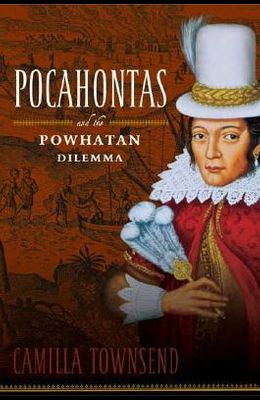 Camilla Townsend's stunning new book, Pocahontas and the Powhatan Dilemma, differs from all previous biographies of Pocahontas in capturing how similar seventeenth century Native Americans were--in the way they saw, understood, and struggled to control their world---not only to the invading British but to ourselves.

Neither naive nor innocent, Indians like Pocahontas and her father, the powerful king Powhatan, confronted the vast might of the English with sophistication, diplomacy, and violence. Indeed, Pocahontas's life is a testament to the subtle intelligence that Native Americans, always aware of their material disadvantages, brought against the military power of the colonizing English. Resistance, espionage, collaboration, deception: Pocahontas's life is here shown as a road map to Native American strategies of defiance exercised in the face of overwhelming odds and in the hope for a semblance of independence worth the name.

Townsend's Pocahontas emerges--as a young child on the banks of the Chesapeake, an influential noblewoman visiting a struggling Jamestown, an English gentlewoman in London--for the first time in three-dimensions; allowing us to see and sympathize with her people as never before.

0
|   0  reviews
Did you read Pocahontas and the Powhatan Dilemma: The American Portraits Series (American Portrait Series)? Please provide your feedback and rating to help other readers.
Write Review