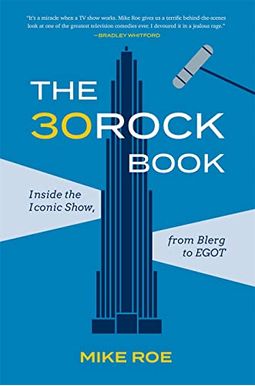 The 30 Rock Book: Inside the Iconic Show, from Blerg to Egot

In the fall of 2006, NBC somehow unveiled two new shows set in the world of late-night sketch comedy: Studio 60 on the Sunset Strip and 30 Rock. It was Aaron Sorkin versus Tina Fey, and it was clear which series critics thought was more promising. The Baltimore Sun called it a competition 30 Rock can't win. By November, the New York Times was noting lackluster ratings for both shows, and adding that 30 Rock was perilously close to a flop. But while Studio 60 was canceled after 22 episodes, Fey's madcap buddy comedy lasted 138 episodes. It resurrected the career of Alec Baldwin, survived an extended absence by Tracy Morgan, and permeated the culture--it's breakneck pacing, oddball characters, and extremely rich joke writing are deeply beloved by millions of fans. In this combination of narrative and oral history, culture writer and editor Mike Roe brings to life the history of the gloriously goofy show through interviews with the creators, stars, writers, and bit players.

Frequently Asked Questions About The 30 Rock Book: Inside the Iconic Show, from Blerg to Egot

0
|   0  reviews
Did you read The 30 Rock Book: Inside the Iconic Show, from Blerg to Egot? Please provide your feedback and rating to help other readers.
Write Review

List of All Editions of The 30 Rock Book: Inside the Iconic Show, from Blerg to Egot