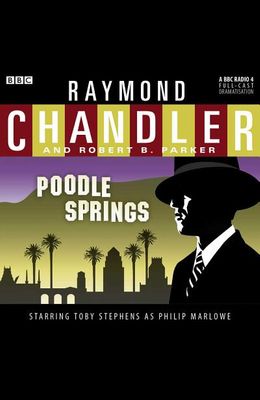 Book #8 in the Philip Marlowe Series
by
Raymond Chandler and Bbc 4 Radio and Robert B Parker
$0.00
Select Format

When Raymond Chandler died in 1959, he left behind the first four chapters of a new Philip Marlowe thriller. Now three decades later, Robert B. Parker, the bestselling creator of the Spenser detective novels, has completed Poodle Springs in a full-length masterpiece of criminal passion.

More than just an impressive homage, this is a first-rate detective novel with all of the suspense, action, and human drama that we have come to expect from the best.--Playboy

Philip Marlowe is alive and well and living in Poodle Springs, California. He's married to a wealthy heiress now. But living in the lap of luxury hasn't made a dent in Marlowe's cynicism--or his talent for attracting trouble. Soon he's on a trail of greed, lust, and murder as dark and cunning as any he's ever seen. Philip Marlowe is back in business.

0
|   0  reviews
Did you read Poodle Springs? Please provide your feedback and rating to help other readers.
Write Review