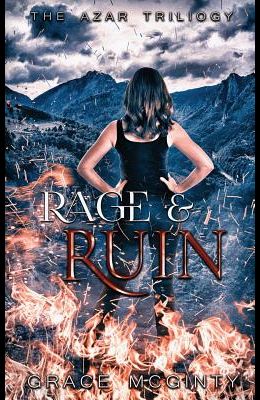 Book #3 in the The Azar Trilogy Series
by
Grace Mcginty
$17.99
Select Format

The supernatural world is in chaos. The Djinn Council are dead, the body count is rising daily, and the Adel forces are scattered and leaderless.

But this is only the beginning. The Fae are amassing an army that threatens to decimate the already weakened Djinn people.

Their mission? To subjugate or destroy the other supernatural inhabitants of the planet, until they can rise up as the New Gods.

Azar Nazemi was comfortable in her role of black sheep of Djinn society. She'd even grown used to her servitude. Now her world was in tatters, and her instincts told her to run and hide. But the pressure of a divine prophecy, a lover who no longer had a corporeal form, and the guardianship of the next King of the Seelie Fae meant running was no longer an option.

The world might be in tatters, but she'd finally found something she was willing to stand and fight for, people she had grown to love, and the promise of a life she had only dreamed could be real.

Could she stand up and become the unlikely hero that the Djinn needed, and maybe make a brave new world in the process?

Rage and Ruin is the third and final book in The Azar Trilogy.

The Azar Trilogy Series In Order - By Grace Mcginty

0
|   0  reviews
Did you read Rage And Ruin: The Azar Trilogy: Book Three? Please provide your feedback and rating to help other readers.
Write Review

List of All Editions of Rage And Ruin: The Azar Trilogy: Book Three