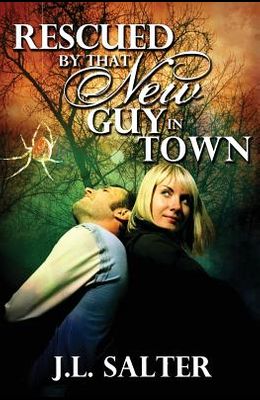 Rescued By That New Guy In Town

When Kris awakens in a costume, behind wooden bars inside a pitch-black community center, her only available rescuer is the hung-over new guy in town (who's dressed as a pirate). Problem is: she's sworn-off men, especially buccaneers.

Badly burned four years ago by a player who ruined her financially, Kris Prima's heart is locked down as tightly as her lifestyle is confined by those massive debts. When first assisted by recent newcomer Ryan Hazzard, Kris is resentful, slightly afraid, and determined never again to trust men. But when court-ordered community service brings them together once more, she begins to appreciate Ryan's charm, good looks, and capable manner.

With all the rumors and assumptions which followed Ryan from a large metropolitan area, how can small-town Kris even begin to trust him? And why won't he explain any of those situations? Through her efforts to learn Ryan's mysterious past, they share further experiences: many comedic, one quite dangerous, and others very tender. Despite several misunderstandings, Kris's bottled-up feelings slowly re-awaken and she finally learns enough about Ryan to know she wants him in her life somehow. Kris regains her ability to trust a man and her heart is freed from its jail.

Frequently Asked Questions About Rescued By That New Guy In Town

0
|   0  reviews
Did you read Rescued By That New Guy In Town? Please provide your feedback and rating to help other readers.
Write Review