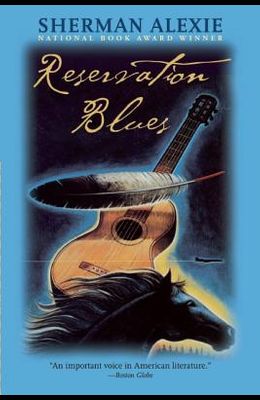 Many may remember the tale of Robert Johnson, the musician who sold his soul to the devil at the crossroads in exchange for being the best blues guitarist around.

What many may not know is that after this tragic deal in Mississippi, Johnson ended up in a small town on the Spokane Indian reservation in Washington state-at least that's how author Sherman Alexie tells it. In his new book Reservation Blues, Alxie spins the fictional tale of Johnson's adventure at a new crossroads, this one in a small town called Wellpinit, Wash. It is here that he comes to seek out Big Mom, a local medicine woman, and, in so doing, leaves his famous guitar in the hands of misfit storyteller Thomas Builds-the-Fire. Builds-the-Fire, brought back from Alexie's last book, The Lone Ranger and Tonto Fistfight in Heaven, takes up Johnson's magical guitar and, along with Victor Joseph, Junior Polatkin and two Flathead Indian sisters named Chess and Checkers, goes on to build a reservation blues band that takes the Northwest by storm. As the band plays club after club, Alexie uses music as a crosscultural bridge, without compromising the cultural integrity of his characters. The band members seem to take on the gamut of problems faced by Indians on the reservation today, battling everything from alcoholism to violence, political corruption to sexual abuse. Ghosts from the past, both personal and historical haunt the musicians, serving both to hold them back and urge them on. It would seem that the scars of abuse run deep. (The Commercial Appeal, June 11, 1995)

0
|   0  reviews
Did you read Reservation Blues? Please provide your feedback and rating to help other readers.
Write Review