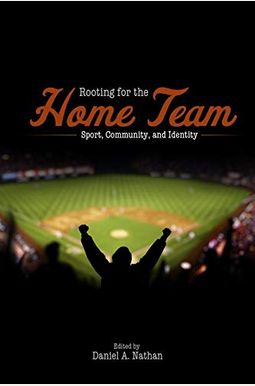 Rooting For The Home Team: Sport, Community, And Identity

by
Daniel A Nathan and Amy Bass and Susan Cahn
$34.04
Select Format

Rooting for the Home Team examines how various American communities create and maintain a sense of collective identity through sports. Looking at large cities such as Chicago, Baltimore, and Los Angeles as well as small rural towns, suburbs, and college towns, the contributors consider the idea that rooting for local athletes and home teams often symbolizes a community's preferred understanding of itself, and that doing so is an expression of connectedness, public pride and pleasure, and personal identity. Some of the wide-ranging essays point out that financial interests also play a significant role in encouraging fan bases, and modern media have made every seasonal sport into yearlong obsessions. Celebrities show up for big games, politicians throw out first pitches, and taxpayers pay plenty for new stadiums and arenas. The essays in Rooting for the Home Team cover a range of professional and amateur athletics, including teams in basketball, football, baseball, and even the phenomenon of no-glove softball. Contributors are Amy Bass, Susan Cahn, Mark Dyreson, Michael Ezra, Elliott J. Gorn, Christopher Lamberti, Allison Lauterbach, Catherine M. Lewis, Shelley Lucas, Daniel A. Nathan, Michael Oriard, Carlo Rotella, Jaime Schultz, Mike Tanier, David K. Wiggins, and David W. Zang.

Frequently Asked Questions About Rooting For The Home Team: Sport, Community, And Identity

0
|   0  reviews
Did you read Rooting For The Home Team: Sport, Community, And Identity? Please provide your feedback and rating to help other readers.
Write Review

List of All Editions of Rooting For The Home Team: Sport, Community, And Identity