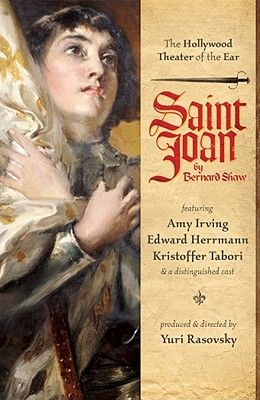 Saint Joan is a play by George Bernard Shaw about 15th century French military figure Joan of Arc. Premiering in 1923, three years after her canonization by the Roman Catholic Church, the play dramatises what is known of her life based on the substantial records of her trial. Shaw studied the transcripts and decided that the concerned people acted in good faith according to their beliefs.

A fine spring morning on the river Meuse, between Lorraine and Champagne, in the year 1429 A.D., in the castle of Vaucouleurs.

Captain Robert de Baudricourt, a military squire, handsome and physically energetic, but with no will of his own, is disguising that defect in his usual fashion by storming terribly at his steward, a trodden worm, scanty of flesh, scanty of hair, who might be any age from 18 to 55, being the sort of man whom age cannot wither because he has never bloomed.

The two are in a sunny stone chamber on the first floor of the castle. At a plain strong oak table, seated in chair to match, the captain presents his left profile. The steward stands facing him at the other side of the table, if so deprecatory a stance as his can be called standing. The mullioned thirteenth-century window is open behind him. Near it in the corner is a turret with a narrow arched doorway leading to a winding stair which descends to the courtyard. There is a stout fourlegged stool under the table, and a wooden chest under the window.

0
|   0  reviews
Did you read Saint Joan? Please provide your feedback and rating to help other readers.
Write Review