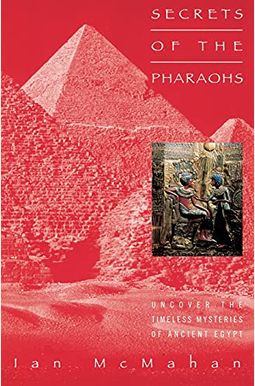 Secrets of the Pharoahs

THE ANCIENT WORLD'S MOST FASCINATING CIVILIZATION

Mankind's fascination with Ancient Egypt has never waned in fifty centuries. The magnificent pyramids, colossal temples and brooding sphinx still awe and enthrall us. Now you can explore all the secrets of one of the world's first and most mysterious civilizations.

In Secrets of the Pharaohs, Ian McMahan surveys the aspects of Ancient Egypt that have made it so irresistible to historians and enthusiasts for centuries: the Rosetta Stone -- hieroglyphics -- the lives of the gods the Book of the Dead -- mummies, curses, and the afterlife the pyramids -- the ghost ship of Cheops -- the Great Sphinx the Temple of Karnak -- the Valley of the Kings the Lost City of Akhenaten -- Cleopatra -- King Tut's tomb the beginnings of modern archaeology -- and much more!

A concise history of Egypt from the rise of civilization on the river Nile through the Old, Middle and New Kingdoms, the book paints a vivid portrait of everyday life throughout those periods. The author also speculates on what is left to learn, including whether ancient astronauts visited and what relationship Egypt might have had to Atlantis.

Presenting the most updated information and featuring a guide to Ancient Egypt on the World Wide Web, Secrets of the Pharaohs unveils the astonishing history, culture, and customs of a fabled civilization.

Frequently Asked Questions About Secrets of the Pharoahs

0
|   0  reviews
Did you read Secrets of the Pharoahs? Please provide your feedback and rating to help other readers.
Write Review

List of All Editions of Secrets of the Pharoahs