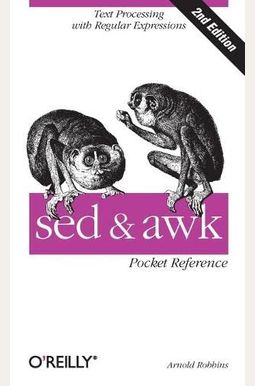 For people who create and modify text files, sed and awk are power tools for editing. sed, awk, and regular expressions allow programmers and system administrators to automate editing tasks that need to be performed on one or more files, to simplify the task of performing the same edits on multiple files, and to write conversion programs.

The sed & awk Pocket Reference is a companion volume to sed & awk, Second Edition, Unix in a Nutshell, Third Edition, and Effective awk Programming, Third Edition. This new edition has expanded coverage of gawk (GNU awk), and includes sections on:

This small book is a handy reference guide to the information presented in the larger volumes. It presents a concise summary of regular expressions and pattern matching, and summaries of sed and awk.

Arnold Robbins, an Atlanta native now happily living in Israel, is a professional programmer and technical author and coauthor of various O'Reilly Unix titles. He has been working with Unix systems since 1980, and currently maintains gawk and its documentation.

0
|   0  reviews
Did you read Sed And Awk Pocket Reference: Text Processing With Regular Expressions? Please provide your feedback and rating to help other readers.
Write Review

List of All Editions of Sed And Awk Pocket Reference: Text Processing With Regular Expressions