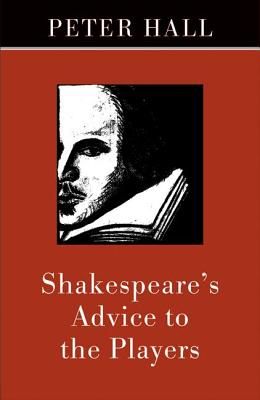 Shakespeare's Advice to the Players

Shakespeare's text is packed with clues that help the reader to hear and the performer to act any speech. He also tells the actor when to go fast and when to go slow and when to accent a particular word.

This book sets out to make going to Shakespeare performances or acting in them a richer experience, and it should have a wide appeal to both actors and audiences.

It also celebrates Sir Peter Hall's fifty years as a director of Shakespeare; from his early days at Cambridge, through founding the Royal Shakespeare Company at Stratford on Avon in the early '60s, and later to his fifteen years as the director of the Royal National Theatre of Great Britain. Throughout these years, Peter Hall worked with the greatest Shakespearean actors of our generation including Laurence Olivier, John Gielgud, Edith Evans, Ralph Richardson, Peggy Ashcroft, Charles Laughton and in later years Judi Dench, Anthony Hopkins, Ian Holm, David Warner, and many others. Through this great line flows a tradition of speaking and understanding Shakespeare that remains as relevant and important today. And it is Hall's experience of working and learning with these and many other actors over the years that underpins the core of this book.

Sir Peter Hall is one of the major figures in theatre today. To date he has directed over two hundred productions, including the world premiere in English of Samuel Beckett's Waiting for Godot, and the premieres of most of Harold Pinter's plays. His diary and autobiography are published by Oberon Books.

Frequently Asked Questions About Shakespeare's Advice to the Players

0
|   0  reviews
Did you read Shakespeare's Advice to the Players? Please provide your feedback and rating to help other readers.
Write Review

List of All Editions of Shakespeare's Advice to the Players