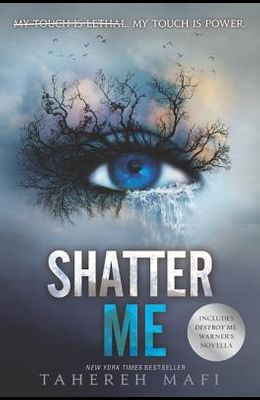 Book #1 in the Shatter Me Series
by
Tahereh Mafi
$18.15
Select Format

The irresistible first book in the gripping Shatter Me series, now featuring gorgeous jacket art to match the rest of the series, and including the Destroy Me novella

No one knows why Juliette has such incredible power. It feels like a curse, a burden that one person alone could never bear. But The Reestablishment sees it as a gift, sees her as an opportunity. An opportunity for a deadly weapon.

Juliette has never fought for herself before. But when she's reunited with the one person who ever cared about her, she finds a strength she never knew she had.

The jacket of this new hardcover edition matches the beautiful artwork of the paperback edition. It also includes the Destroy Me novella, which is told from Warner's point of view, and a brand-new author's note. Perfect for fans who have followed the series from the beginning and craved a matching set of books, and for new readers looking to check out the series.

And don't miss Defy Me, the shocking fifth book in the Shatter Me series

Frequently Asked Questions About Shatter Me

What should you read after Shatter Me Book? Here is a list of books to read if you read and loved Shatter Me

3
|   1  review
Did you read Shatter Me? Please provide your feedback and rating to help other readers.
Write Review
1