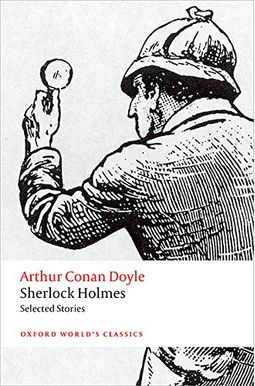 Part of the Sherlock Holmes Series
by
Doyle A Conan and Barry Mccrea
$6.62
Select Format

'Detection is, or ought to be, an exact science'

For more than a century the Holmes stories have held a strange, almost inexplicable grip on the popular imagination. They are intimately associated with late Victorian and Edwardian society, yet curiously timeless in their appeal. The characters of Sherlock Holmes and Dr Watson, together with their housekeeper Mrs Hudson and their address at 221B Baker Street are as familiar today as when they made their first appearance in the late 1880s. The stories have been endlessly interpreted, adapted, and modernized, but still we return to Arthur Conan Doyle's originals. This new selection of some of the best of Sherlock Holmes is designed to give readers a full sense of his world: the brooding fog of London, ruined heirs in creaking mansions, and hidden crimes in the farthest-flung corners of the British Empire. The stories take Holmes's career from its early days to its end, and include the book-length Sign of the Four. Barry McCrea's introduction investigates the currents that lie beneath the surface. About the Series: For over 100 years Oxford World's Classics has made available the broadest spectrum of literature from around the globe. Each affordable volume reflects Oxford's commitment to scholarship, providing the most accurate text plus a wealth of other valuable features, including expert introductions by leading authorities, voluminous notes to clarify the text, up-to-date bibliographies for further study, and much more.

Sherlock Holmes Series In Order - By Doyle A Conan

0
|   0  reviews
Did you read Sherlock Holmes: Selected Stories? Please provide your feedback and rating to help other readers.
Write Review

List of All Editions of Sherlock Holmes: Selected Stories