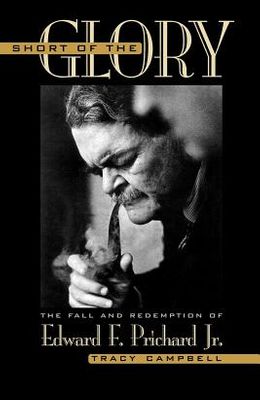 Short of the Glory: The Fall and Redemption of Edward F. Prichard Jr.

Arthur Schlesinger Jr. thought that he might one day become president. He was a protege of Felix Frankfurter and Fred Vinson--a political prodigy who held a series of important posts in the Roosevelt and Truman administrations. Whatever became of Edward F. Prichard, Jr., so young and brilliant and seemingly destined for glory?

Prichard was a complex man, and his story is tragically ironic. The boy from Bourbon County, Kentucky, graduated at the top of his Princeton class and cut a wide swath at Harvard Law School. He went on to clerk in the U.S. Supreme Court and become an important figure in Roosevelt's Brain Trust. Yet Prichard--known for his dazzling wit and photographic memory--fell victim to the hubris that had helped to make him great.

In 1948, he was indicted for stuffing 254 votes in a U.S. Senate race. J. Edgar Hoover, never a fan of the young genius, made sure he was prosecuted, and so many of the members of the Supreme Court were Prichard's friends that not enough justices were left to hear his appeal. So the man Roosevelt's advisors had called the boy wonder of the New Deal went to jail.

Prichard's meteoric rise and fall is essentially a Greek tragedy set on the stage of American politics. Pardoned by President Truman, Prichard spent the next twenty-five years working his way out of political exile. Gradually he became a trusted advisor to governors and legislators, though without recognition or compensation. Finally, in the 1970s and 1980s, Prichard emerged as his home state's most persuasive and eloquent voice for education reform, finally regaining the respect he had thrown away in his arrogant youth.

Frequently Asked Questions About Short of the Glory: The Fall and Redemption of Edward F. Prichard Jr.

0
|   0  reviews
Did you read Short of the Glory: The Fall and Redemption of Edward F. Prichard Jr.? Please provide your feedback and rating to help other readers.
Write Review

List of All Editions of Short of the Glory: The Fall and Redemption of Edward F. Prichard Jr.