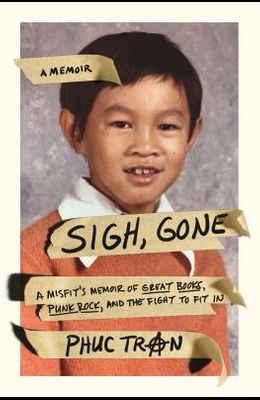 Sigh, Gone: A Misfit's Memoir of Great Books, Punk Rock, and the Fight to Fit in

For anyone who has ever felt like they don't belong, Sigh, Gone shares an irreverent, funny, and moving tale of displacement and assimilation woven together with poignant themes from beloved works of classic literature.

In 1975, during the fall of Saigon, Phuc Tran immigrates to America along with his family. By sheer chance they land in Carlisle, Pennsylvania, a small town where the Trans struggle to assimilate into their new life. In this coming-of-age memoir told through the themes of great books such as Metamorphosis, The Scarlett Letter, The Iliad, and more, Tran navigates the push and pull of finding and accepting himself despite the challenges of immigration, feelings of isolation, teenage rebellion, and assimilation, all while attempting to meet the rigid expectations set by his immigrant parents.

Appealing to fans of coming-of-age memoirs such as Fresh Off the Boat, Running with Scissors, or tales of assimilation like Viet Thanh Nguyen's The Displaced and The Refugees, Sigh, Gone explores one man's bewildering experiences of abuse, racism, and tragedy, and reveals redemption and connection in books and punk rock. Against the hairspray-and-synthesizer backdrop of the '80s, he finds solace and kinship in the wisdom of classic literature, and in the subculture of punk rock, he finds affirmation and echoes of his disaffection. In his journey for self-discovery Tran ultimately finds refuge and inspiration in the art that shapes--and ultimately saves--him.

Frequently Asked Questions About Sigh, Gone: A Misfit's Memoir of Great Books, Punk Rock, and the Fight to Fit in

Books like Sigh, Gone: A Misfit's Memoir of Great Books, Punk Rock, and the Fight to Fit in

0
|   0  reviews
Did you read Sigh, Gone: A Misfit's Memoir of Great Books, Punk Rock, and the Fight to Fit in? Please provide your feedback and rating to help other readers.
Write Review

List of All Editions of Sigh, Gone: A Misfit's Memoir of Great Books, Punk Rock, and the Fight to Fit in