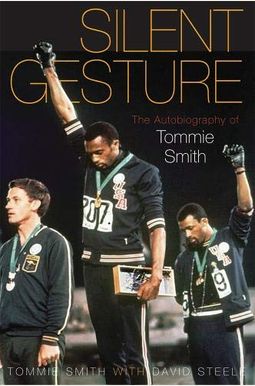 n 1968, Tommie Smith and his teammate John Carlos won the gold and silver medals, respectively, for the 200 meter dash.a Receiving their medals on the dais, they raised their fists and froze a moment in time that will forever be remembered as a powerful day of protest.a In this, his autobiography, Smith tells the story of that moment, and of his life before and after it, to explain what that moment meant to him.a

In Silent Gesture, Smith recounts his life before and after the 1968 Olympics: his life-long commitment to athletics, education, and human rights.a He dispels some of the myths surrounding his and Carlos' act on the dais -- contrary to legend, Smith wasn't a member of the Black Panthers, but a member of the US Olympic Project for Human Rights -- and describes in detail the planning and risks involved in his protest.a Smith also details his many years after Mexico City of devotion to human rights, athletics, and education.a A unique resource for anyone concerned with international sports, history, and the African American experience, Silent Gesture contributes a complete picture of one of the most famous moments in sports history, and of a man whose actions always matched his words.

Books like Silent Gesture: The Autobiography Of Tommie Smith

0
|   0  reviews
Did you read Silent Gesture: The Autobiography Of Tommie Smith? Please provide your feedback and rating to help other readers.
Write Review

List of All Editions of Silent Gesture: The Autobiography Of Tommie Smith