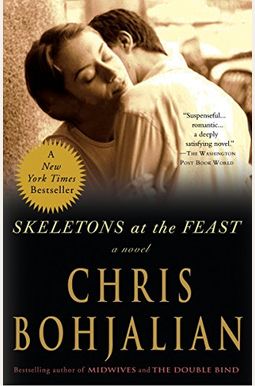 Skeletons At The Feast

In January 1945, in the waning months of World War I, a small group of people begin the longest journey of their lives: an attempt to cross the remnants of the Third Reich, from Warsaw to the Rhine if necessary, to reach the British and American lines.

Among the group is eighteen-year-old Anna Emmerich, the daughter of Prussian aristocrats. There is her lover, Callum Finella, a twenty-year-old Scottish prisoner of war who was brought from the stalag to her family's farm as forced labor. And there is a twenty-six-year-old Wehrmacht corporal, who the pair know as Manfred-who is, in reality, Uri Singer, a Jew from Germany who managed to escape a train bound for Auschwitz. As they work their way west, they encounter a countryside ravaged by war. Their flight will test both Anna's and Callum's love, as well as their friendship with Manfred-assuming any of them even survive. Perhaps not since The English Patient has a novel so deftly captured both the power and poignancy of romance and the terror and tragedy of war. Skillfully portraying the flesh and blood of history, Chris Bohjalian has crafted a rich tapestry that puts a face on one of the twentieth century's greatest tragedies-while creating, perhaps, a masterpiece that will haunt readers for generations.

Frequently Asked Questions About Skeletons At The Feast

0
|   0  reviews
Did you read Skeletons At The Feast? Please provide your feedback and rating to help other readers.
Write Review

List of All Editions of Skeletons At The Feast