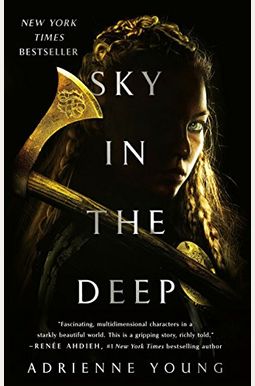 Sky In The Deep

A 2018 Most Anticipated Young Adult book from debut author Adrienne Young, Sky in the Deep is part Wonder Woman, part Vikings--and all heart. OND ELDR. BREATHE FIRE. Raised to be a warrior, seventeen-year-old Eelyn fights alongside her Aska clansmen in an ancient, rivalry against the Riki clan. Her life is brutal but simple: fight and survive. Until the day she sees the impossible on the battlefield--her brother, fighting with the enemy--the brother she watched die five years ago. Faced with her brother's betrayal, she must survive the winter in the mountains with the Riki, in a village where every neighbor is an enemy, every battle scar possibly one she delivered. But when the Riki village is raided by a ruthless clan thought to be a legend, Eelyn is even more desperate to get back to her beloved family. She is given no choice but to trust Fiske, her brother's friend, who sees her as a threat. They must do the impossible: unite the clans to fight together, or risk being slaughtered one by one. Driven by a love for her clan and her growing love for Fiske, Eelyn must confront her own definition of loyalty and family while daring to put her faith in the people she's spent her life hating. THIS IS A GRIPING STORY, RICHLY TOLD. --Ren e Ahdieh, Read More chevron_right

Frequently Asked Questions About Sky In The Deep

Sky in the Deep Series In Order - By Adrienne Young

5
|   10  reviews
Did you read Sky In The Deep? Please provide your feedback and rating to help other readers.
Write Review
1

List of All Editions of Sky In The Deep