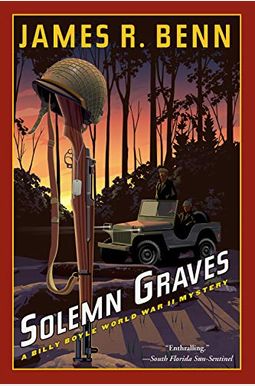 US Army detective Billy Boyle is called to investigate a mysterious murder in a Normandy farmhouse that threatens Allied operations.

July, 1944, a full month after D-Day. Billy, Kaz, and Big Mike are assigned to investigate a murder close to the front lines in Normandy. An American officer has been found dead in a manor house serving as an advance headquarters outside the town of Tr vi res. Major Jerome was far from his own unit, arrived unexpectedly, and was murdered in the dark of night. The investigation is shrouded in secrecy, due to the highly confidential nature of the American unit headquartered nearby in the Norman hedgerow country: the 23rd Headquarters Special Troops, aka, the Ghost Army. This vague name covers
a thousand-man unit with a unique mission within the US Army: to impersonate other US Army units by creating deceptions using radio traffic, dummy inflatable vehicles, and sound effects, causing the enemy to think they are facing large formations. Not even the units adjacent to their positions know what they are doing. But there are German spies and informants everywhere, and Billy must tread carefully, unmasking the murder while safeguarding the secret of the Ghost Army--a secret which, if discovered, could turn the tide of war decisively against the Allies.

0
|   0  reviews
Did you read Solemn Graves (A Billy Boyle Wwii Mystery)? Please provide your feedback and rating to help other readers.
Write Review