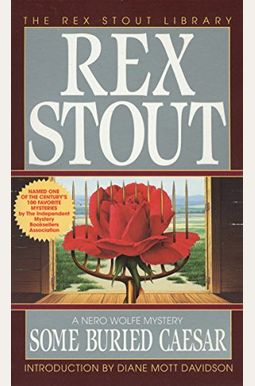 A prize bull, a restaurateur's tacky publicity stunt, a family feud (among the bull's owners), and the death of a family scion pit Nero Wolfe and Archie Goodwin against a special breed of killer.

An automobile breakdown strands Nero Wolfe and Archie in the middle of a private pasture--and a family feud over a prize bull. A restauranteur's plan to buy the stud and barbecue it as a publicity stunt may be in poor taste, but it isn't a crime . . . until Hickory Caesar Grindon, the soon-to-be-beefsteak bull, is found pawing the remains of a family scion. Wolfe is sure the idea that Caesar is the murderer is, well, pure bull. Now the great detective is on the horns of a dilemma as a veritable stampede of suspects--including a young lady Archie has his eye on--conceals a special breed of killer who wins a blue ribbon for sheer audacity.

Introduction by Diane Mott Davidson It is always a treat to read a Nero Wolfe mystery. The man has entered our folklore.--The New York Times Book Review A grand master of the form, Rex Stout is one of America's greatest mystery writers, and his literary creation Nero Wolfe is one of the greatest fictional detectives of all time. Together, Stout and Wolfe have entertained--and puzzled--millions of mystery fans around the world. Now, with his perambulatory man-about-town, Archie Goodwin, the arrogant, gourmandizing, sedentary sleuth is back in the original seventy-three cases of crime and detection written by the inimitable master himself, Rex Stout.

0
|   0  reviews
Did you read Some Buried Caesar? Please provide your feedback and rating to help other readers.
Write Review