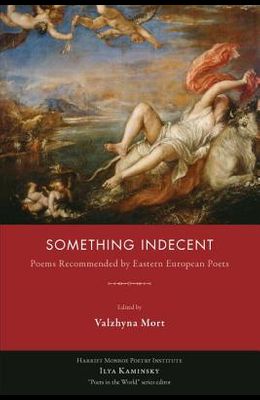 Something Indecent is intended as a kind of symposium on European poetry. Seven contemporary Eastern European poets--Adam Zagajewski, Vera Pavlova, Tomaz Salamun, Ales Steger, Nikola Madzirov, Eugenijus Alisanka, and editor Valzhyna Mort--introduce us to poems by writers who have become for them windows onto the world. They were asked: Who are the best representative poets of your region? Your generation? And, more broadly: Who are your favorite European poets of the 20th century? What European poets, across the millennia, are most important to an understanding of your particular region? Spanning thousands of years and thousands of miles, their surprising, often unpredictable choices--and the reasons for those choices--are collected here, forming the latest entry in a poetic conversation carried across centuries, countries, and traditions. More than a presentation of contemporary Eastern European poets, Something Indecent is a conversation about how European poets view themselves, their contemporaries, their century, and the place of their region in the millennia. Includes poems by Guillaume Apollinaire, Bertolt Brecht, Joseph Brodsky, Catullus, Paul Celan, John Donne, Zbigniew Herbert, Nu00e2zim Hikmet, Antonio Machado, Czeslaw Milosz, Cesare Pavese, Raymond Queneau, Rainer Maria Rilke, Tomaz Salamun, Sappho, Anna Swir, Wislawa Szymborska, Georg Trakl, Tomas Transtru00f6mer, Cu00e9sar Vallejo, Paul Valu00e9ry, and many others.

0
|   0  reviews
Did you read Something Indecent: Poems Recommended by Eastern European Poets? Please provide your feedback and rating to help other readers.
Write Review

List of All Editions of Something Indecent: Poems Recommended by Eastern European Poets