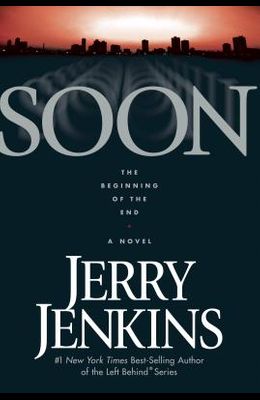 Soon: The Beginning of the End

Book #1 in the The Underground Zealot Series
by
Jerry B Jenkins
$3.88
Select Format

The End of War

In the aftermath of World War I, the world is resolved as never before to eliminate war. The United States of America has followed the lead of the new international government to ensure that global conflict is wiped from the earth. All nations have agreed to eliminate the most serious threat to world peace. The solution? Outlaw religion.

No religion. Peace on earth.

Paul Stepola plays a key role in the world's backlash against religious extremists. As an agent working for the National Peace Organization, Paul relishes his job. The law has forced religion underground, but that's not enough for Paul. With unlimited resources, he is determined to expose religious zealots-flush them out, expose them, and destroy them. But when his life is turned upside down, he is forced to see the world in a whole new way.

This one man's search to find the truth points him to sinister conspiracies. Startling revelations. Supernatural events.

When will the world discover the astonishing climax to these events? When will the nations learn they are experiencing a new beginning.the beginning of the end?

Soon.
The Beginning of the End.

Frequently Asked Questions About Soon: The Beginning of the End

The Underground Zealot Series In Order - By Jerry B Jenkins

0
|   0  reviews
Did you read Soon: The Beginning of the End? Please provide your feedback and rating to help other readers.
Write Review

List of All Editions of Soon: The Beginning of the End