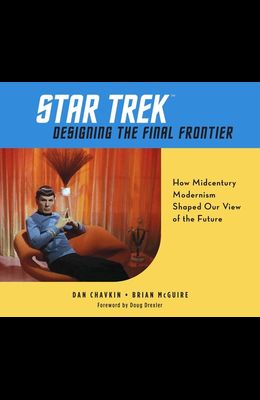 Star Trek: Designing the Final Frontier: How Midcentury Modernism Shaped Our View of the Future

Celebrate Star Trek: The Original Series and the show's distinctive Mid-Century modern design that would change design- and television- forever.

Star Trek: The Original Series (1966-1969) was the first installment of one of the most successful and longest-running television franchises of all time. Today, Trekkers champion its writing, progressive social consciousness, and aesthetic. Designing the Final Frontier is a unique, expert look at the mid-century modern design that created and inspired that aesthetic. From Eames chairs to amorphous sculptures, from bright colors to futuristic frames, Star Trek: TOS is bursting with mid-century modern furniture, art, and design elements--many of them bought directly from famous design showrooms. Author and mid-century modern design expert Dan Chavkin has created an insider's guide to the interior of original starship Enterprise and beyond, that is sure to attract Star Trek's thriving global fan base.

Frequently Asked Questions About Star Trek: Designing the Final Frontier: How Midcentury Modernism Shaped Our View of the Future

Other science fiction, fantasy & horror books you might enjoy

0
|   0  reviews
Did you read Star Trek: Designing the Final Frontier: How Midcentury Modernism Shaped Our View of the Future? Please provide your feedback and rating to help other readers.
Write Review

List of All Editions of Star Trek: Designing the Final Frontier: How Midcentury Modernism Shaped Our View of the Future