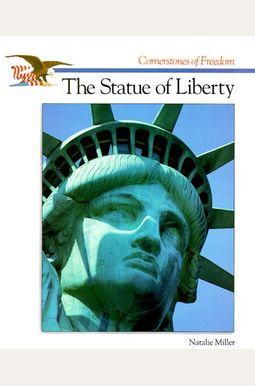 Part of the Wonders of the World Series
by
Natalie Miller
$3.88
Select Format

The true story of America's most beloved symbol -- a tale of art and idealism.

With her right hand she lifts a torch, the light of liberty. In her left hand she holds a book whose cover reads JULY IV MDCLXVI, the date of the signing of the United States' Declaration of Independence. Under her left foot is a broken chain, a symbol of the end of slavery.

The Statue of Liberty pays homage to what is best about the United States, yet it originated in France. Living under the repressive rule of a self-proclaimed emperor, sculptors Edouard de Laboulaye and Frederic-Auguste Bartholdi wanted to show their countrymen that tyranny is not inevitable and that there is a place in the world where all citizens have unalienable rights that no government can take from them.

After two decades of planning, cajoling, fundraising, designing and building, these artists brought their dream of Liberty across the ocean. Now, 125 years after she was placed on her pedestal in New York Harbor, she continues to inspire people all over the world.

So does her story.

Wonders of the World Series In Order - By Natalie Miller

5
|   4  reviews
Did you read Statue Of Liberty? Please provide your feedback and rating to help other readers.
Write Review
1