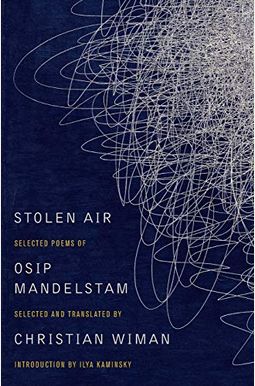 A new selection and translation of the work of Osip Mandelstam, perhaps the most important Russian poet of the twentieth century

Political nonconformist Osip Mandelstam's opposition to Stalin's totalitarian government made him a target of the communist state. The public recitation of his 1933 poem known in English as The Stalin Epigram led to his arrest, exile, and eventual imprisonment in a Siberian transit camp, where he died, presumably in 1938. Mandelstam's work--much of it written under extreme duress--is an extraordinary testament to the enduring power of art in the face of oppression and terror.

Stolen Air spans Mandelstam's entire poetic career, from his early highly formal poems in which he reacted against Russian Symbolism to the poems of anguish and defiant abundance written in exile, when Mandelstam became a truly great poet. Aside from the famous early poems, which have a sharp new vitality in Wiman's versions, Stolen Air includes large selections from The Moscow Notebooks and The Voronezh Notebooks.

Going beyond previous translators who did not try to reproduce Mandelstam's music, Christian Wiman has captured in English--for the first time--something of Mandelstam's enticing, turbulent, and utterly heartbreaking sounds.

0
|   0  reviews
Did you read Stolen Air: Selected Poems Of Osip Mandelstam? Please provide your feedback and rating to help other readers.
Write Review

List of All Editions of Stolen Air: Selected Poems Of Osip Mandelstam