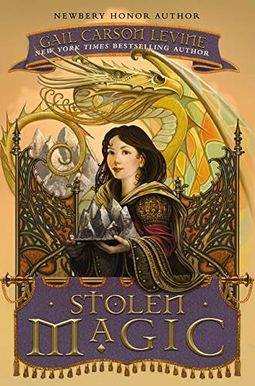 Book #2 in the A Tale of Two Castles Series
by
Gail C Levine
$3.98
Select Format

A prophecy, a theft, and an unstable volcano threaten to destroy Elodie's home.

Elodie, the dragon Masteress Meenore, and the ogre Count Jonty Um are all on their way to Elodie's home island of Lahnt. Just five weeks before, Elodie left for the town of Two Castles with nothing but a single copper in her purse, and now she is returning a professional dragon detective's assistant and friend to a count!

Elodie has barely set foot on Lahnt before she learns that it is in terrible danger. The Replica, a statue that keeps a deadly volcano from erupting, has been stolen from its mountain home. If the Replica isn't found in three days, a mountain will be destroyed and its inhabitants will be killed. And when Elodie is left without her companions, she has to use her wits to try to unravel a tangled web of lies and save her island home.

Newbery Honor author Gail Carson Levine has written an engaging, imaginative, fast-paced mystery that will be enjoyed by fans of A Tale of Two Castles as well as those meeting Elodie, Meenore, and Count Jonty Um for the first time.

0
|   0  reviews
Did you read Stolen Magic? Please provide your feedback and rating to help other readers.
Write Review