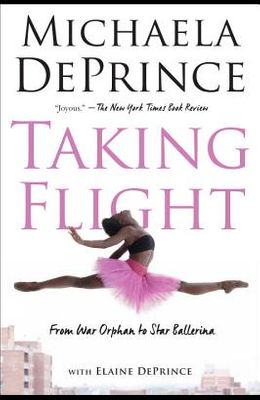 SON TO BE A MAJOR MOTION PICTURE DIRECTED BY MADONA

The extraordinary memoir of an orphan who danced her way from war-torn Sierra Leone to ballet stardom, most recently appearing in Beyonce's Lemonade and as a principal in a major American dance company.

Michaela is nothing short of a miracle, born to be a ballerina. For every young brown, yellow, and purple dancer, she is an inspiration --Misty Copeland, world-renowned ballet dancer

Michaela DePrince was known as girl Number 27 at the orphanage, where she was abandoned at a young age and tormented as a devil child for a skin condition that makes her skin appear spotted. But it was at the orphanage that Michaela would find a picture of a beautiful ballerina en pointe that would help change the course of her life. At the age of four, Michaela was adopted by an American family, who encouraged her love of dancing and enrolled her in classes. She went on to study at the Jacqueline Kennedy Onassis School at the American Ballet Theatre and is now the youngest principal dancer with the Dance Theatre of Harlem. She has appeared in the ballet documentary First Position, as well as on Dancing with the Stars, Good Morning America, and Nightline. In this engaging, moving, and unforgettable memoir, Michaela shares her dramatic journey from an orphan in West Africa to becoming one of ballet's most exciting rising stars. Michaela DePrince is the embodiment of what it means to fight for your dream. --Today Michaela DePrince is a role model for girls on and off stage. --NYLON

0
|   0  reviews
Did you read Taking Flight: From War Orphan to Star Ballerina? Please provide your feedback and rating to help other readers.
Write Review

List of All Editions of Taking Flight: From War Orphan to Star Ballerina