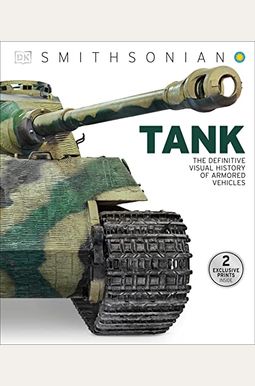 Pivotal to modern warfare, tanks have dominated the battlefield for over a century. Get up close to more than 400 military colossuses with this definitive visual guide to armored vehicles.

In 1916, the British built a vehicle that could pound the battlefield impervious to enemy fire, crushing obstacles and barbed wire in its path. The first tank, or Mother as it was known, had arrived. In Tank you can view it in detail, along with other iconic models including the German Panzer, the legendary Tiger, the Vickers Medium Mark I, the Centurion, and the Hellcat - the fastest armored fighting vehicle ever. This comprehensive volume takes you through the most exciting story in recent military history with the development of heavy artillery, anti-tank weaponry, and the men - such as Mikail Koshkin and Sir William Tritton - who designed these awe-inspiring beasts. Produced with The Tank Museum, Tank traces the tank's development in response to two world wars, Korea, Vietnam, the Cold War and many other conflicts. It shows each model in detail, highlighting details such as their performance, specification, armor, weaponry, and much more. If you are interested in modern warfare, Tank is truly unmissable reading.

Books like Tank: The Definitive Visual History Of Armored Vehicles

5
|   9  reviews
Did you read Tank: The Definitive Visual History Of Armored Vehicles? Please provide your feedback and rating to help other readers.
Write Review
1

List of All Editions of Tank: The Definitive Visual History Of Armored Vehicles