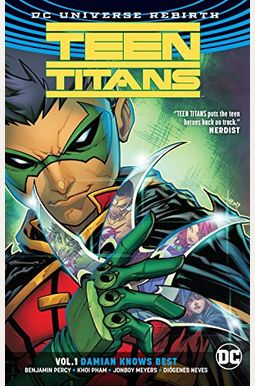 Exploding from the blockbuster DC Rebirth event, it's an action-packed new spin on one of the most famous superhero teams of all time, from writer Benjamin Percy (Green Arrow) and a titanic team of talented artists including Jonboy Meyers (Spawn), Diogenes Neves (Green Lantern: New Guardians) and Khoi Pham (The Mighty Avengers) comes Teen Titans Vol. 1: Damian Knows Best.

His father is the world's greatest detective. His grandfather is the world's deadliest terrorist. He is Damian Wayne, a.k.a. Robin, Son of Batman--and he now commands the Teen Titans. Whether they like it or not. When Starfire, Raven, Beast Boy and Kid Flash answer this brash new Boy Wonder's call for help, they find themselves on the front lines of a war between Damian and his immortal grandfather, Ra's al Ghul. The entire League of Assassins and the elite Demon's Fist are prepared to move against these young heroes, all to claim Robin for their own. And if these new Titans are toppled, so be it. The stakes are crystal clear: if they win, they live. If they lose, Robin will join the forces of evil--and the rest of them are history. But with Damian in charge, sometimes death doesn't look so bad. It's a culture clash for the ages in Teen Titans Vol. 1: Damian Knows Best. Collects Teen Titans #1-5 and Teen Titans: Rebirth #1.