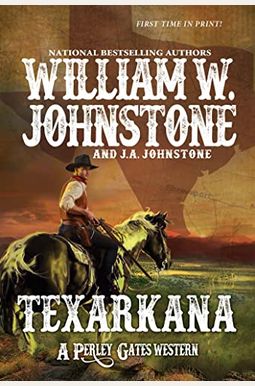 From the Greatest Western Writers of the 21st Century, William W. Johnstone and J.A. Johnstone, the 6th blazing adventure featuring Perley Gates, a new hero in the Old West who's carving out his own legacy in the violent American frontier. He's as honest and good as his heavenly name, so when an unholy trio of cutthroat rustlers turn a routine horse drive into an epic showdown between good and evil--with a little divine justice from gunfighting legend Perley Gates.


JOHNSTONE COUNTRY. RUSTLERS' PARADISE.
At first, the job sounds easy: lead a small herd of horses across the Arkansas-Texas border to the Double-D ranch near Texarkana. No problem--at least not for a man like Perley Gates. In fact, he's looking forward to the 150-mile journey with his old sidekick Possum Smith and young Sonny Rice, and doesn't expect any trouble along the way. Unfortunately, trouble has a way of finding Perley Gates. This time, it's a trigger-happy trio of horse thieves who take one look at old Possum, young Sonny, and the low-key Perley, and decide they're three very easy targets. But in the Old West, nothing comes easy. Except death. So begins one hell of a showdown. On one side are the forces of evil itself, with notorious gunslinger Spade Devlin gunning for blood. On the other side are a few good men, a town under siege--and a merciless angel of vengeance named Perley Gates.

0
|   0  reviews
Did you read Texarkana? Please provide your feedback and rating to help other readers.
Write Review