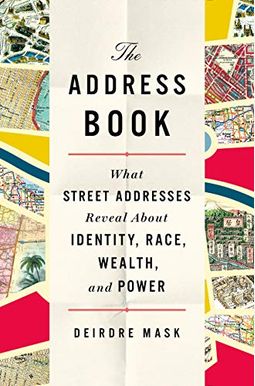 The Address Book: What Street Addresses Reveal about Identity, Race, Wealth, and Power

An exuberant work of popular history: the story of how streets got their names and houses their numbers, and why something as seemingly mundane as an address can save lives or enforce power.

In a 2013 article for The Atlantic, Deirdre Mask documented the efforts by West Virginia to give addresses to all its rural residents, allowing them access to goods and services they never had, whether it was a box from Amazon or state benefits. Mask's research for that article plunged her into the fascinating history of addresses, taking her from ancient Rome to 19th century New York City to present day Korea. We learn that the practice of numbering individual houses began in 18th century Vienna by Maria Theresa, leader of the Hapsburg Empire, not for helping her subjects navigate the city or receive mail, but rather to tax them and draft them into her military. In 19th century London, Mask recounts the story of Dr. John Snow, who used the city's recently introduced street numbers to help identify the source and spread of a cholera epidemic. In the present day, Mask travels from India to Korea to Ireland, tracing the different ways street names are created, celebrated, and in some cases, banned.

Filled with fascinating people and histories, this incisive, entertaining book shows how street names are about identity, class, and race. But most of all they are about power: the power to name, to hide, to decide who counts, who doesn't, and why.

Books like The Address Book: What Street Addresses Reveal about Identity, Race, Wealth, and Power

0
|   0  reviews
Did you read The Address Book: What Street Addresses Reveal about Identity, Race, Wealth, and Power? Please provide your feedback and rating to help other readers.
Write Review

List of All Editions of The Address Book: What Street Addresses Reveal about Identity, Race, Wealth, and Power