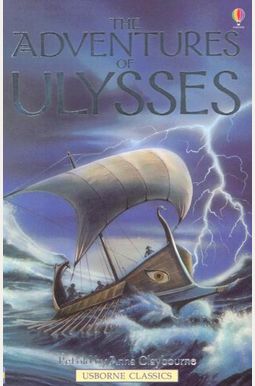 The Adventures Of Ulysses

The legendary adventures of the Greek king's epic journey come to life in a modern retelling of The Odyssey that's an unmitigated delight (School Library Journal).

In their ten-year siege of Troy, the Greeks claim victory thanks to the cunning wit of Ulysses, King of Ithaca, who devised the infamous Trojan Horse. Now, with the epic war finally finished, Ulysses sets sail for home--but his journey will be long and arduous. Having angered Poseidon, god of the sea, Ulysses and his men are thrown off course by a raging storm and forced to wander the perilous world for another ten years. On his epic trek, Ulysses must match wits and strength with man-eating Sirens, a towering Cyclops, the witch-goddess Circe, and a slew of other deadly foes. Meanwhile, in Ithaca, his wife, Penelope, and son, Telemachus, contend with a rowdy mob of suitors who have taken over their home in an attempt to usurp the absent ruler's place.

Frequently Asked Questions About The Adventures Of Ulysses

0
|   0  reviews
Did you read The Adventures Of Ulysses? Please provide your feedback and rating to help other readers.
Write Review

List of All Editions of The Adventures Of Ulysses