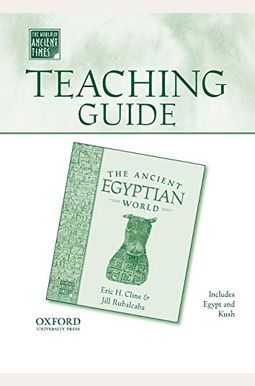 The Edwin Smith Papyrus details the injuries sustained by the builders of the great pyramids, and the remedies used to treat them. For a worker who has had a stone fall on his head, it suggests: bind it with fresh meat . . . and treat afterward with grease, honey and lint. A complex recipe for a top-of-the-line mummy describes a process that could take 70 days and involved drawing the brain out through the nose with a crooked piece of iron. These primary sources also tell the stories of the people of ancient Egypt: Pepi I, the six-year-old boy king who commanded armies; Ramesses I, whose mortuary temple boasts of his expertise in battle against the Hittites; Queen Hatshepsut, the only woman to rule Egypt as pharaoh; and Cleopatra, who courted Roman statesman Mark Antony as part of her quest to extend the Egyptian empire. The Ancient Egyptian World honors the history of a civilization whose monuments and tombs still capture the imagination of the world thousands of years later.

0
|   0  reviews
Did you read Teaching Guide to the Ancient Egyptian World? Please provide your feedback and rating to help other readers.
Write Review