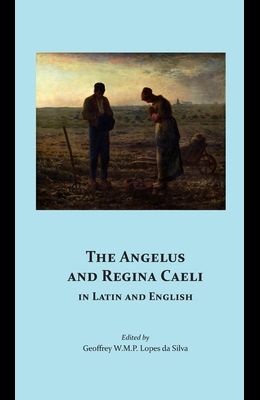 The Angelus and Regina Caeli in Latin and English

The Angelus and Regina Caeli in Latin and English (2021) contains everything needed for praying the prayers known as the Angelus Domini and the Regina caeli, which are traditionally prayed in the morning, at midday, and in the evening, usually at 6am, noon, and 6pm.

The Angelus Domini (Angel of the Lord) is a Marian prayer devotion in honour of the Incarnation. Rooted in Sacred Scripture, it consists of three versicles with their responses followed by a Hail Mary, a brief concluding verse with its response, and one of two collect prayers from The Roman Missal.

During Easter Time, the Angelus is replaced with the Regina c li (Queen of Heaven). This 12th century prayer consists of a Marian antiphon, followed by a verse with its response, and an Easter collect prayer from The Roman Missal.

This 24-page prayer book also includes some other prayers, such as the Prayer for the Pope (oratio pro papa), due to the traditional connection of this devotion with the Holy Father, who leads it almost every Sunday at noon from the window of the Apostolic Palace.

Everything is included in both English and Latin, which remains the official language of the Catholic Church.

0
|   0  reviews
Did you read The Angelus and Regina Caeli in Latin and English? Please provide your feedback and rating to help other readers.
Write Review