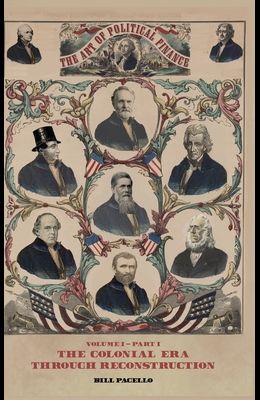 The Art of Political Finance: Volume I - Part I

With the fallout of 2008 and the current structure of the financial system under scrutiny by people the world over, scores of books, documentaries, and videos were produced to explain what happened and what the future holds. Specifically, in the United States, inflation and debt, the profits of which are reaped at the highest concentrated levels, are in question. But in order to understand the complexity of the 21st-century political economy, the domestic divisions, and the possible outcomes, like any study, it must be done at the beginning, and at the elementary level.

Volume I of The Art of Political Finance is a macro-economic primer and orientation to the political and financial history of the United States. Part I covers the period from the Colonial Era through Reconstruction. It reveals trends through the history of money, banking, and party politics that were at the foundation of consolidated capital and the concentration of power. The entire volume confronts economic philosophy touching on the differences, similarities, and conflicts between Thomas Jefferson and Alexander Hamilton, Andrew Jackson and Nicholas Biddle, and to the lesser-known ideas of Peter Cooper that often opposed financial officiating by John Sherman and his colleagues. Without an understanding of the events of the 19th century, the major backdrop of this volume, we cannot fully understand the United States in its current form considering the residual cultural and economic values and political systems that perdure.

The author has added over 60 full-color illustrations throughout the book.

Frequently Asked Questions About The Art of Political Finance: Volume I - Part I

0
|   0  reviews
Did you read The Art of Political Finance: Volume I - Part I? Please provide your feedback and rating to help other readers.
Write Review

List of All Editions of The Art of Political Finance: Volume I - Part I